Installing A Touch Of Class With Dumbwaiters In London

Although the majority of our trade involves passenger lift systems, we are often approached to install dumbwaiters in London and beyond. Our most recent project involved installing a dumbwaiter system in London’s exclusive Mayfair district.

Incredibly simple in their design, and integral to the smooth operation of restaurants and catering establishments across the country, dumbwaiters, also known as food lifts or Service Lifts have a long history and a design honed by over 120 years of use. Dumbwaiter Lift Systems were first introduced in New York in the late 1800s, as a system of transportation for goods in restaurants between floors and up from the kitchen areas. Their basic structure involved a shaft, a cart  and a movement method, originally a manually operated system of ropes and pulleys, which was replaced by electrical motors in the 1920s. Dumbwaiters in London appeared not long after, and have remained integral to the smooth running of hundreds of establishments ever since. 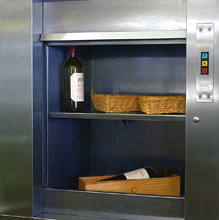 They can be equally practical when installed in retail and even residential properties as an easy way of transporting small goods between floors. We were recently contacted to design and install a pair of dumbwaiters into a high end residential property in London’s exclusive Mayfair. The custom built companion lift system was needed to run from the kitchen area at basement level to the dining room on a higher floor. After consulting with the client and measuring up during a site visit, we designed and manufactured a pair of bespoke dumbwaiter lifts which fitted into the existing shaft space restrictions. The lifts ran smoothly and quietly, and provided an elegant and professional solution of transportation for our clients, who were thrilled with the installation.

If you would like to discuss your requirements for a installation of a dumb waiter in London or any other lift requirements in London or across the country, whether it be a residential, commercial, industrial or public property, then please get in touch today. Call us on 01582 601099, or email us at info@tower-lifts.co.uk,

We have experience fitting dumbwaiters in Covent Garden, Fulham, Belgravia, Hyde Park, Holland Park and many more areas throughout London and the UK, so please get in touch. Call us today on 01525 601099 or email us at info@tower-lifts.co.uk

Look what else Tower Lifts can offer:

Any cookies that may not be particularly necessary for the website to function and is used specifically to collect user personal data via analytics, ads, other embedded contents are termed as non-necessary cookies. It is mandatory to procure user consent prior to running these cookies on your website.